Wellesley ‘s Centennial Hall was shrouded in secrecy this afternoon as over 300 boys sat quietly, in anticipation of a ‘special Assembly ‘, in honour of one of Wellesley’s longest standing teachers, Mr Steve Girvan (“Mr. G”), and his wife Sharon.

Mr. Pitman opened with “No, boys, Mr. G was not two years old when he first started at Wellesley!” prompting giggles from the bleachers and setting the tone for a lovely ceremony.

First up was the” Bay Boys Choir”, kicking off the celebrations with a wonderful tune called “Glorious”, by Stephanie Mabey, and directed by Carolyn Currington.

Geof Shirtlcliffe, Chair of the Board of Trustees followed with a few anecdotes about Mr. G, before presenting him with a ‘proper’ rugby Jersey (Hurricanes) to help him “broaden his rugby knowledge and horizons”.

Malachy took the pulpit and followed with a cheeky and inspirational speech about how Mr. G made it fun to learn and how he helped open his mind. He thanked Mr. G on behalf of all the school and from the “middle of his heart”.

Mr. Blandford, in turn, offered a few words of wisdom: Having started at Wellesley on the same day, back in 1984, he said that Mr G. had always been at the heart of Wellesley. He calculated that Mr. G had roughly impacted on the lives of 3000 boys throughout his 35 years and that, during this time, he has been the ‘glue’ that has kept the staff together, and, with his wife Sharon, had always looked after the ‘gappers’, welcoming them into their home.

Mr. Pitman then presented a special gift to Mr. G: Two framed works consisting of a “Wordle” and of the corresponding sentences that each Senior boy had written about what Mr. G meant to them. 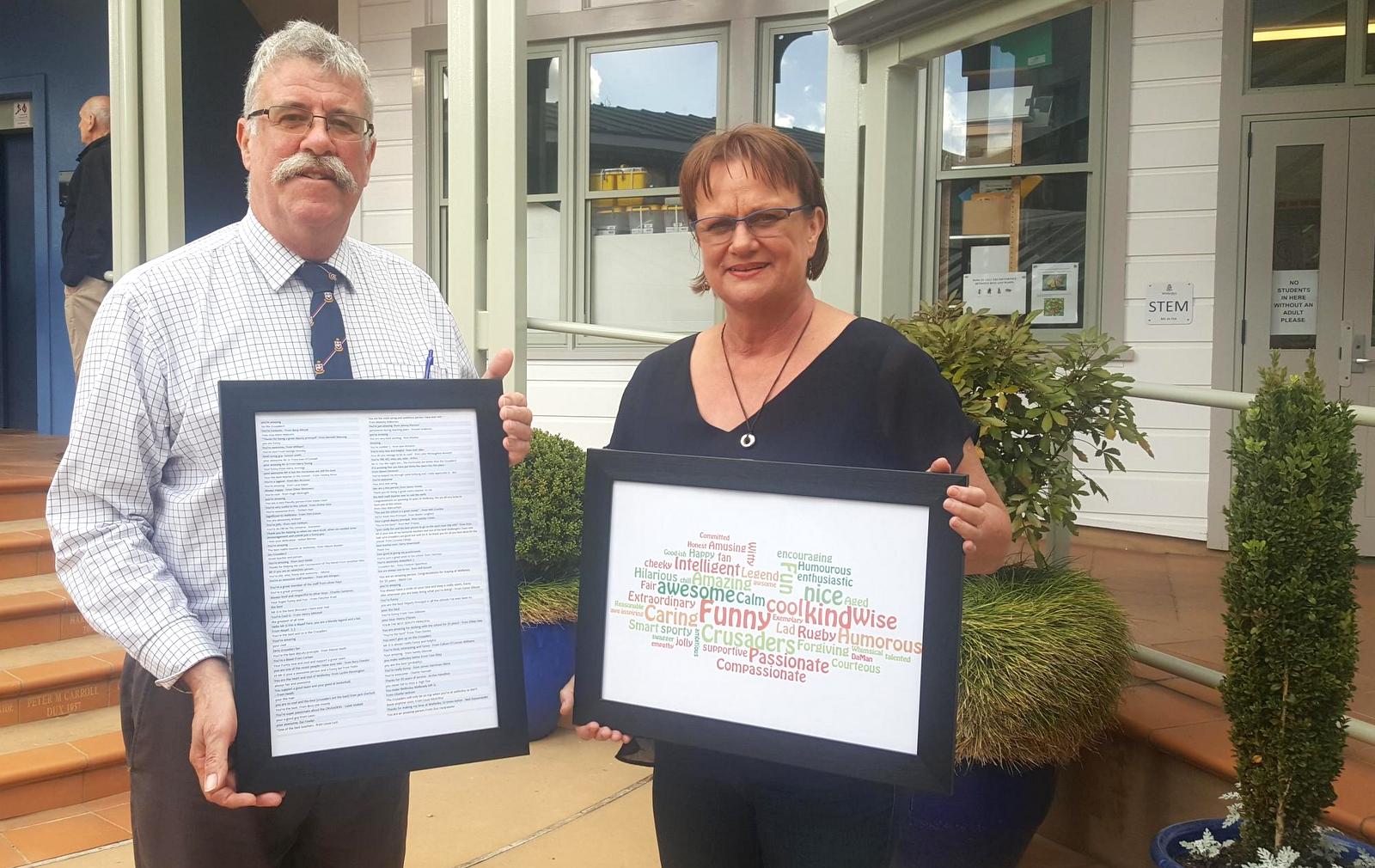 Now it was Mr. G’s turn to respond:  He thanked all the boys and assured them that the wonderful gifts would find pride of place, in his home, next to his framed Crusaders jersey!

He told them ” If you’re going to be a teacher, you may as well teach somewhere enjoyable. You are all good boys and have given me so much in return.” He thanked the Staff, the boys, and his wife, who has also contributed so much to the school over the years.

Assembly continued with a lovely video for Mr. and Mrs. G from all the boys, singing and dancing to the tune: “35 years, Mr. G, that’s awesome!”

The closing number was performed by the outstanding duo of Eric Zhang and Rick Zeng.

Staff and pupils then sang the Wellesley song before going out onto the field to view the Senior boys form a number “35” on the lawn in honour of Mr. G. Alas, the wind blew our STEM drone about, but we did manage to capture the occasion!

What a fitting celebration for an outstanding educator who has so generously offered his heart and soul to our school. Kia Ora, Mr. G! 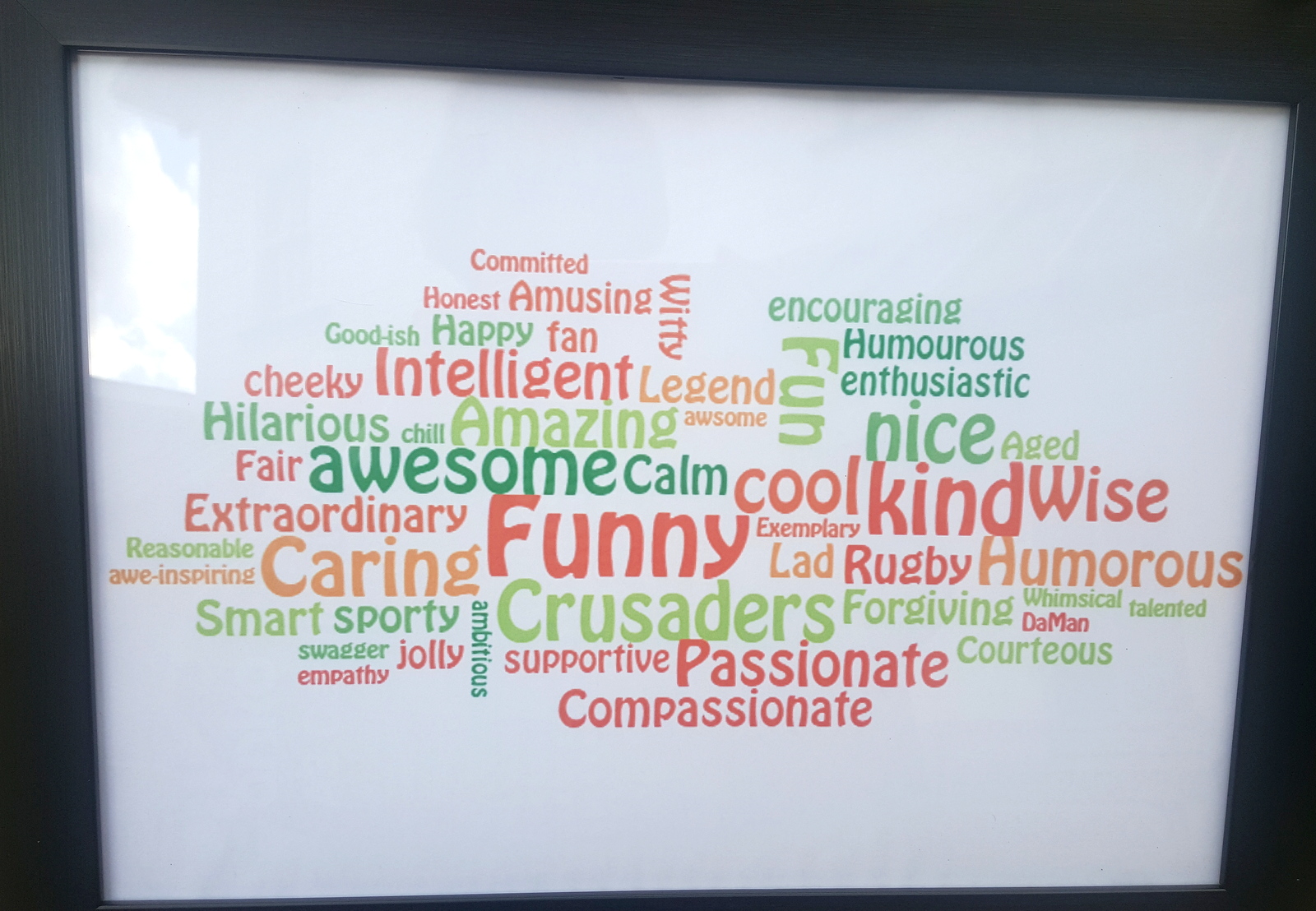