We love receiving images, memories and keepsakes from our old boys and their families.  The stories that unfold enrich our archives and highlight the importance of our alumni sharing the history of our unique school.

In our latest photo recognition project, we are keen to identify the young men captured in the 1945 Whole School image below and we greatly appreciate any recognition help available!

Old Boy Peter Hargreaves (at Wellesley 1945 – 1948) has done a wonderful job creating an interactive PDF of this 1945 image and would love some suggestions of the remaining 14 names.  Together with the Development Office, and other old boys including David (Edwin) Smart and Gerry Pallo, Peter has referred to the ‘Wellesley – A History’ by Peter Harcourt, including Roll Lists, and his own recollections, to name a significant amount of the boys.

Peter has also made a list of boys that would have been present in this photo but not specifically  identified – it would be great if you can assist with connecting these names to the correct face and/or identifying any of the  remaining missing names in this image.   You can email Peter directly or email alumni@wellesley.school.nz

Boys who were in the 1945 Wellesley photo but not yet named:

Below are a few highlights that have come out of the archives recently. These treasures tell the History of Wellesley. If you have any treasures at home that you would like us to feature please email the Foundation Office. Also if you recognise any of the Old Boys in any of the images we would love to hear from you. 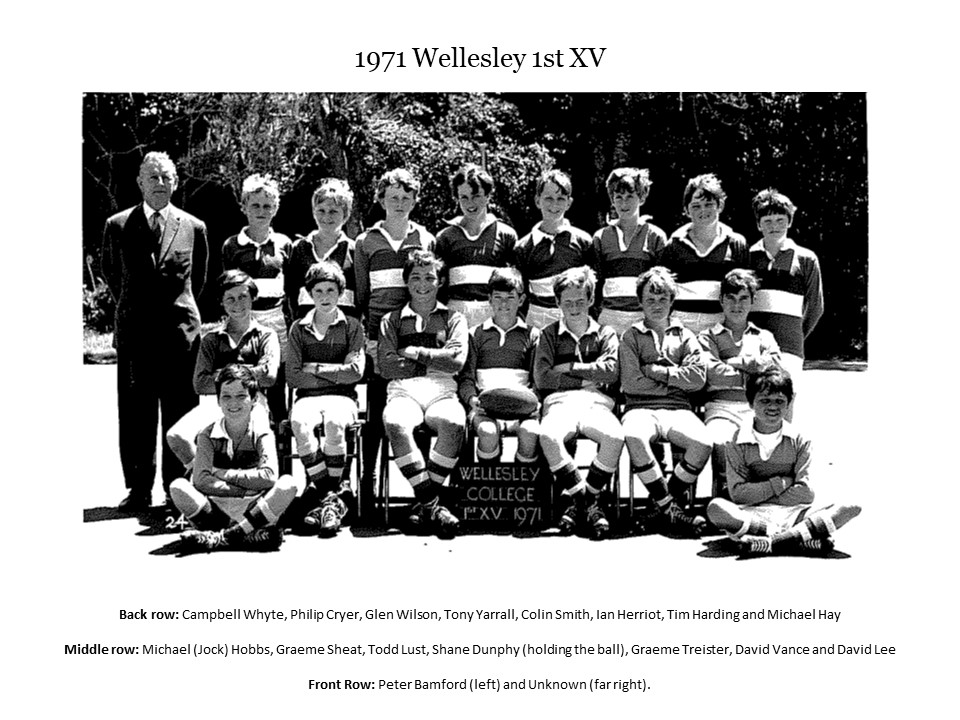 Its 50 years on and special to look back on the Wellesley 1st XV from 1971.  Fast forward today and we have our current boys having a fabulous start to their season with games against HIBS, Scots and Hereworth in a busy month of June 2021. 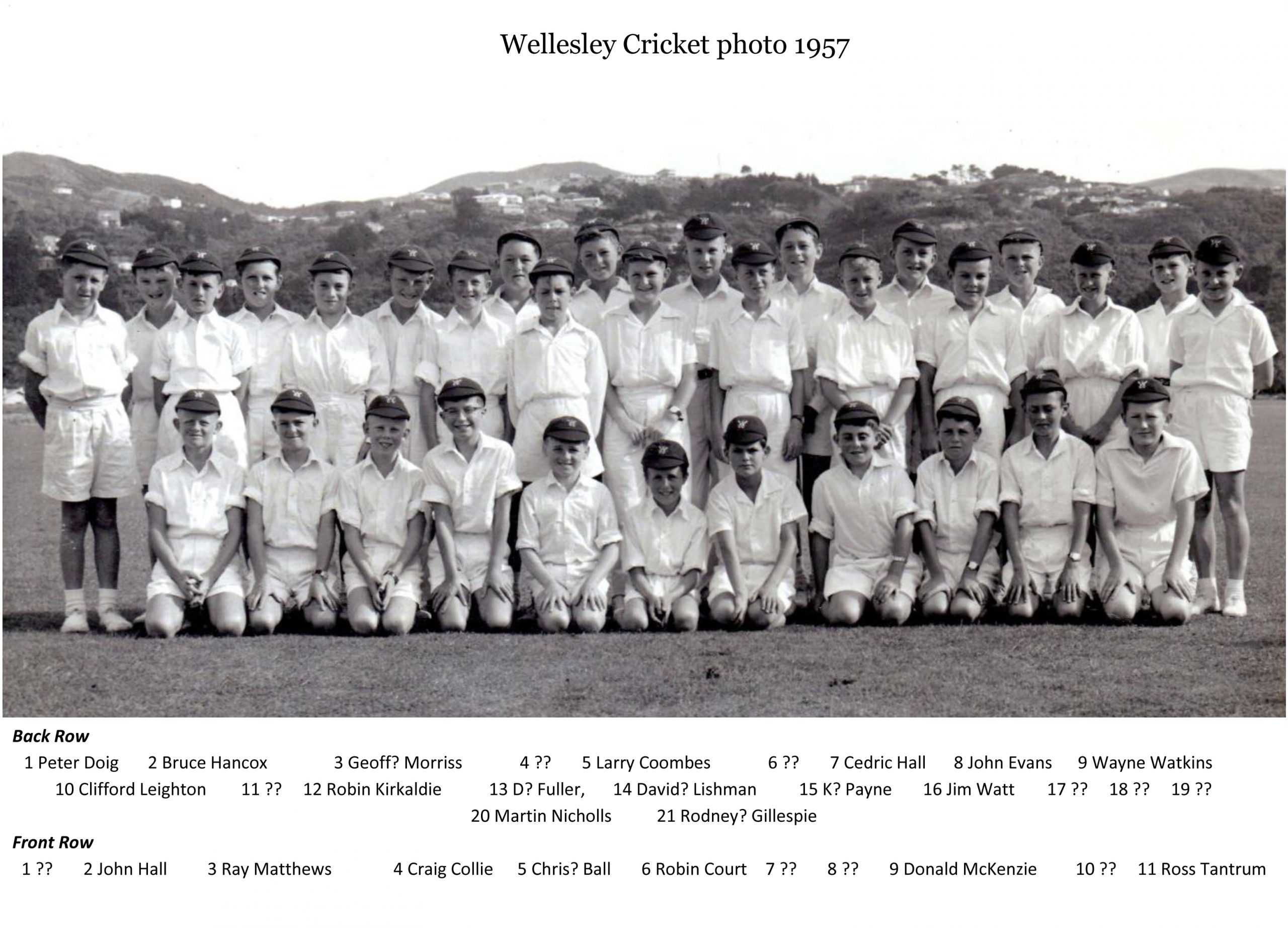 Old Boy Neil Collie (at Wellesley 1955 – 1960, Dux and Best Boy 1960) provided this image of the 1957 cricket squad to our archives collection back in 2015 and would still love some help with name suggestions.  Neil and his older brother Craig (at Wellesley 1952 – 1958) have managed a few with Neil adding  “almost every boy in that pic rings a bell with Craig and me but putting names is of course much harder. I don’t know the coach but would not be surprised if it was Ivan Bowden, given he was the ‘sportiest’ of the male teachers at that time.”

Thank you Neil and Craig, what a fantastic start you have made – lets see what bites we can get to fill the blanks. 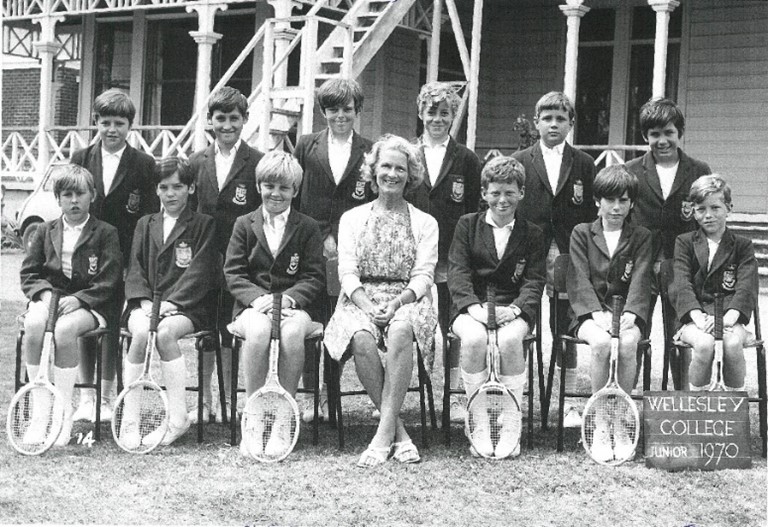 Margaret Barns was a teacher at Wellesley 1941 – 1972.  She was a Standard 3 and PE teacher and tennis coach.  She is pictured below with her tennis team in 1970.  Can you spot any familiar faces?

In 2019,  Margaret celebrated her 104th birthday, at the Rita Angus Retirement Village in Kilbirnie Wellington where she remained until her death in 2020.  Wellesley stays in touch with Margaret’s daughter Jenny who also resides at the same retirement home. If you have any more information about the members of this team, please send any leads to Rosie in the Wellesley Foundation office 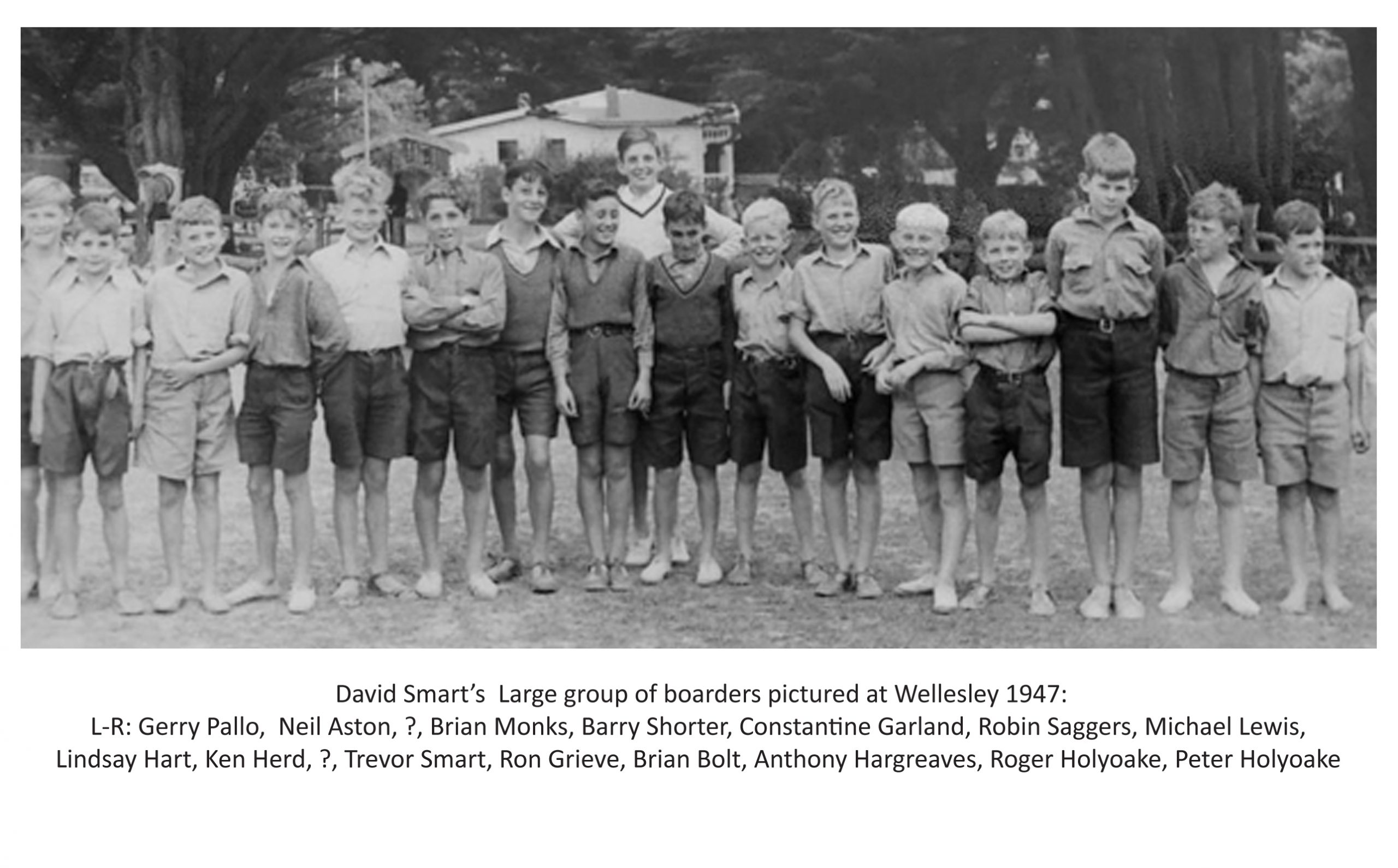 David (Edwin) Smart attended Wellesley as a boarder between 1943 and 1951. Do you recognise any of the fellow boarders? David has written his memories while being a boarder which you can read here.

We also have a few stories of his time at Wellesley which can be downloaded and were featured in At the Bay. 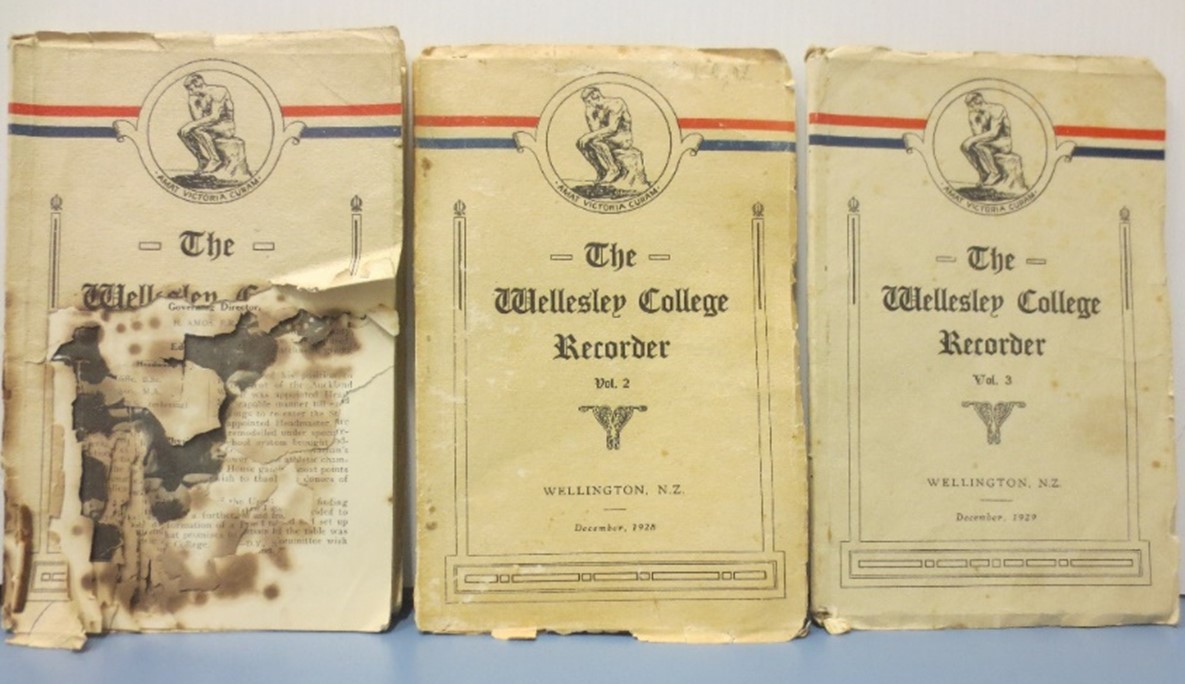 This 1928 edition of the Wellesley Recorder (annual school magazine) was given to Wellesley by the daughter of an Old Boy,  James Wilton-Blyth who attended Wellesley (then on the Terrace) between 1926 and 1928. Great-grandson Tom Evison who attended Wellesley in 2019 and 2020, was present at the handover of this and other treasures from Wellesley’s past. If you would like to read more about James’s story which was featured in At the Bay in 2019 you can using this link. 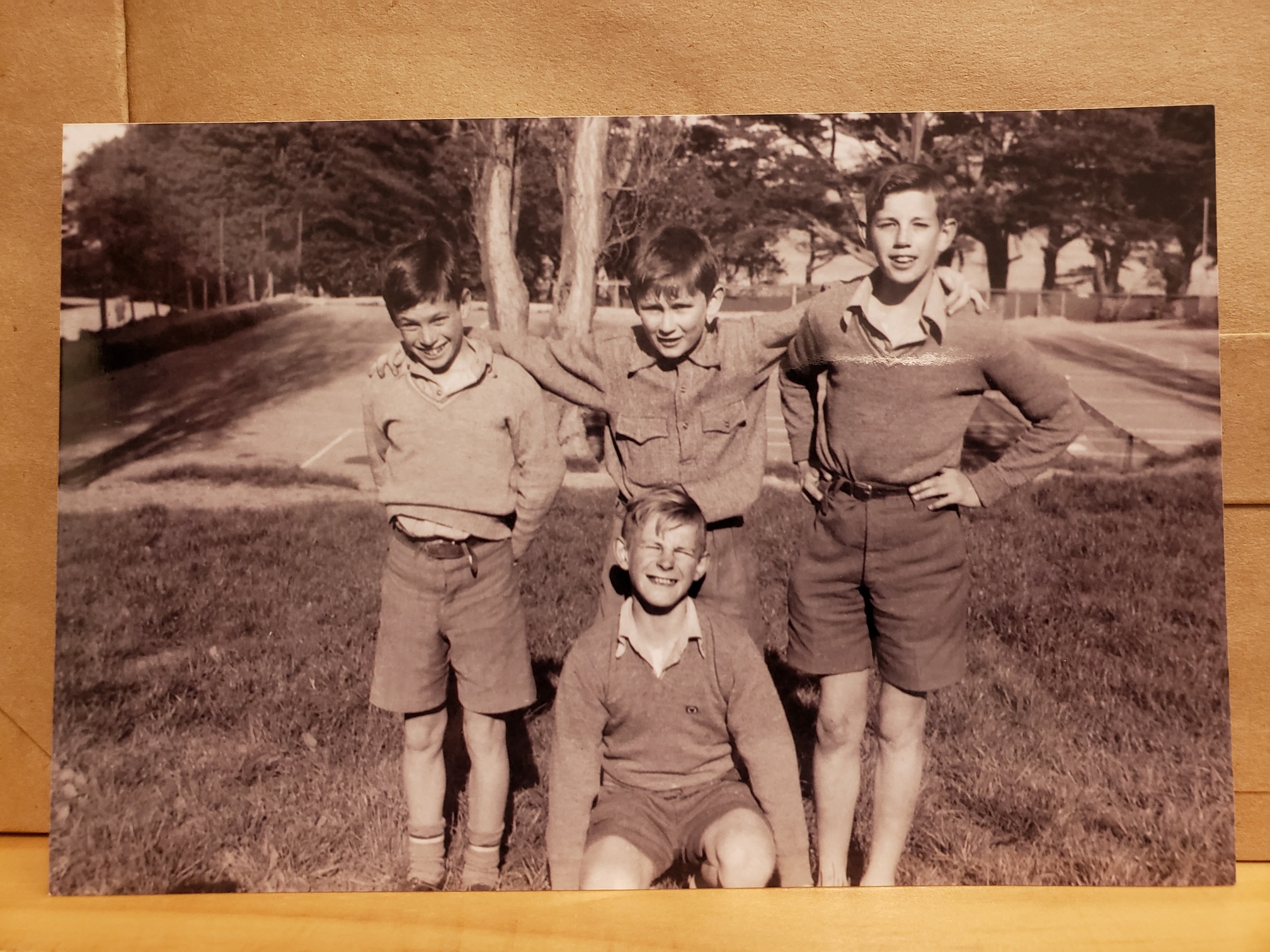 Paul Harper attended Wellesley from 1952 – 1957 (and his brother Alain 1952 – 1955) and has managed to download some precious video footage from his late father’s 8mm projector recordings.  There is various family life, holidays and general scenery captured in the footage (saved over the three files) and it is wonderful to also see glimpses of Wellesley staff, boys, sport and the community at Days Bay between 1953 and 1957.  Who do you recognise?

Footage 3: Wellesley athletics footage, 1953, runs from frames 1:29 – 2:57 and shows Hoppy Stevens, parent races and also the Harper’s visit to Tangiwai (the day after the disaster which occurred 24 Dec 1953).

Our most grateful appreciation to Paul Harper for providing us with these precious not seen before recordings from the 1950s.  70 years on, and look how far technology has come but this is truly special.  Thank you!