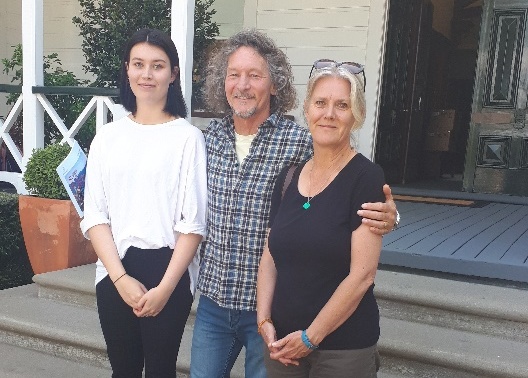 In late January 2019, two brothers, both Old Boys but living in Australia, came separately to Wellesley while in NZ for their sister’s wedding.

Glen Hunwick (pictured with his wife Lisa and daughter Taylor) attended Wellesley as a boarder in 1966 during a time of family upheaval. His elder brother Graham had been attending Wellesley since 1964, and both became weekly boarders for that year. The Headmaster at the time was Mr Bellamy and he especially remembers Matron Brown, who, with her kindness made living away from home as a seven-year-old more bearable.

“Every time we visited home Mrs Brown would hide a small packet of soft jube lollies in our bags – such a small thing but it meant so much.”

We gave Glen and his family a tour around the school campus; and there were several aspects that Glen remembered well especially in Days Bay House, such as his dormitory in Mr Ranchod’s room and the ornate wooden staircase leading to the second floor. He marvelled at his sense of déjà vu when he walked across the bridge into the Dell and followed the stream up into the bush. We discussed how Wellesley’s unrivalled location has enabled it to be an environmental sanctuary for eels, monarch butterflies, weta, lizards and much more and that the boys here even have a blue penguin patrol in collaboration with DOC.

Glen moved to Australia as a child and has had a successful career in animation for the film and advertising industries, through Glen Art Productions. www.glenart.com.au

Among the studio’s many projects was the widely acclaimed short animated film ‘Mutt’ written and directed by studio founder and director Glen.

We welcome any Old Boys who wish to return and wander around the school and reminisce. Please contact the Development Foundation Office  for further information.